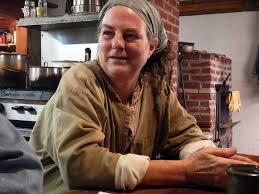 Our friend, mentor, and colleague, Gail Darrell passed away on February 27th, 2015. It is to her memory and in honor of her legacy of service to community and democratic rights that we remember her today. For nearly a decade, Gail worked to protect communities across New England from corporate and government interests that sought to override the rights of people, communities, and nature. As the New England Community Organizer with the Community Environmental Legal Defense Fund (CELDF), and founder of the New Hampshire Community Rights Network (NHCRN), she became a fearless leader for local democratic rights, for the rights of people to self-govern in their own communities, and for the rights of nature to live and flourish.

Gail spearheaded the effort in her own hometown of Barnstead, NH, to become the very first community in the United States to prohibit corporations from privatizing water from local aquifers. Communities in both New Hampshire and Maine soon followed in Barnstead’s footsteps.  Her work took her from town to town, where she would share the “Barnstead Story,” educating and inspiring people to organize in their own communities.Gail inspired all of us at NHCRN, with her dedication and belief in the rights of all people to have the authority to decide what happens in the places where they live.

Further, she believed that the rights of people and communities should never be subordinated to the agendas of corporate and government decision makers whose interests are not their own. For believing that community rights should be elevated over corporate privileges, she was harassed and threatened. And yet, as a leader in the growing Community Rights Movement, Gail never let fear stand in her way. She brought a gentle fierceness into our lives. Gail led with compassion, courage, and wisdom. Her loss has been deeply felt, and she has been well missed. From all of us at NHCRN, we honor and celebrate Gail Darrell.
​
​“First they ignore you, then they laugh at you, then they fight you, then you win.” – Gandhi

​“The New Hampshire Community Rights Network makes education available to New Hampshire citizens with the goal of driving community rights and the recognition of ecosystem rights – an integral part of every community – into fundamental law.”
Proudly powered by Weebly